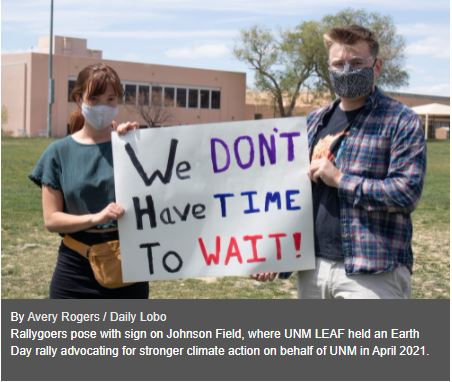 Official review on the legality of the University of New Mexico Foundation’s indirect investment in fossil fuel companies is ongoing, and the UNM Leaders for Environmental Action and Foresight aren’t giving up. After an initial intake meeting with the office of the attorney general on Dec. 17, 2021, where they reviewed the legal arguments and historical background of their complaint filed last October, the office is still in the process of going over all the information.

UNMF, which funds scholarships and campus initiatives at the University, has an estimated $32.5 million of its Consolidated Investment Fund, the investment pool for endowment assets of the University and UNMF, indirectly invested into fossil fuel stock, according to Gabe Gomez, managing director of UNMF marketing and communication. This is 5.6% of the CIF overall.

The UNM LEAF complaint, which was filed with the help of the legal team of the Climate Defense Project, said these financial investments in climate change-causing fossil fuels are a legal violation of the Foundation’s obligation as a nonprofit to provide charitable benefit to its community as per the New Mexico Uniform Prudent Management of Institutional Funds Act. This act states that nonprofit institutions must act toward a purpose that provides some sort of benefit to the community.

“The UNMF may not simply seek profit at any cost: the privileges that the Foundation enjoys as a nonprofit institution, and its obligation to support the public purposes of the state’s flagship institution of higher education, come with the responsibility to ensure that its resources are put to socially beneficial ends,” the complaint reads.

Weisburd said the office was unable to clarify the exact timeline of the complaint. They told members that investigations into complaints typically take six months to a year, but they were unable to say whether the office had started the investigation or was still deciding whether or not to investigate.

When asked for a status update on the UNM LEAF complaint, the office of the attorney general told the Daily Lobo via email that "the status is pending and under review … We have not contacted the UNM Foundation as we are still in the process of reviewing the information received (by UNM LEAF).”

Sofia Jenkins-Nieto, director of operations for UNM LEAF, said the office told them at the meeting that they want UNM LEAF to continue getting letters of support from the community because these letters give the office a sense of how much public support there is for divestment. Jenkins-Nieto noted that there is a link on UNM LEAF's website to sign the petitions and instructions for sending letters of support.

“I think (after the meeting) we were feeling, honestly, mostly happy that it had gotten to this point and excited and hopeful that they would follow through and that this would get UNM’s attention,” Jenkins-Nieto said.

“The strength of the legal argument (for divestment) means that some complaints have pushed schools to divest simply via the legal pressure and threat of an investigation. This was the case at Harvard, for example. And for the schools that fail to respond, the likelihood of an enforcement and compelled divestment grows by the day,” Chung wrote to the Daily Lobo via email.

If UNM does not announce divestment before the attorney general makes a decision, UNM will be the first university to divest because of legal requirements, according to Weisburd.

Weisburd noted that, unlike Harvard and other prominent schools that have divested, UNM would be unique as being both publicly funded and in a high oil- and gas-producing state. New Mexico is the third-largest oil and gas producer in the nation, and while other public universities have divested fossil fuels, divestment efforts have been continually suppressed in Texas and other top oil-producing states.

State auditor and candidate for attorney general Brian Colón invited UNM LEAF to submit a complaint to the state auditor’s office in the interest of strengthening the organization’s legal case against the University, which Jenkins-Nieto said UNM LEAF hopes to do this semester once they finish correcting the original complaint.

UNM LEAF is set to have another follow-up meeting with the attorney general’s office on Feb. 25 in order to present additional research to support the complaint and answer questions that may arise, ultimately “to ensure that the topic remains at the forefront of priorities for the AG,” according to Weisburd. The organization will continue collecting signatures in support of divestment in the meantime.

Zoe Perls is a freelance reporter at the Daily Lobo. She can be contacted at news@dailylobo.com or on Twitter @zoeperls